When the Cockleshell Shatters… 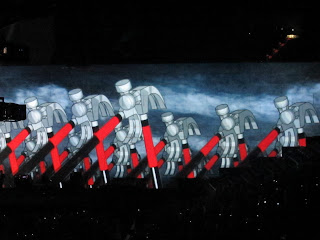 Got a chance to go see The Wall last night (put on live by Roger Waters). I’ll admit I was somewhat familiar with the story, but I hadn’t seen it in its entirety and certainly never live in the Pink Floyd heyday of the 80’s.

That being said, there’s something much more visceral about being able to experience it directly. The concept lends itself to such a metaphoric grace that I think you almost *have* to see it live to appreciate all the different levels. For a piece that’s thirty years old, its messages about war, government, capitalism and just the inner turmoil of one person’s fight against the world still hold true. 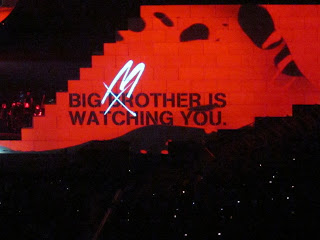 Not to mention the dichotomy of nature vs nurture. How much of who we are is based on our experiences as children? What integral part of our make up can be blamed upon our situation vs our ability to adapt?

From a production standpoint, it’s a pretty brilliant show. Roger Waters is great, as always. (I’ve seen him twice before where he performed some Floyd stuff, some original stuff). His shows do tend to be a bit more mellow, and there was definitely a bit of an older crowd last night. And yeah, lights go down and the weed starts wafting by, but I’ve certainly been to concerts where the drug use was in fuller effect. That being said I was feeling pretty laid back a few hours late due to the fumage.  *ahem* 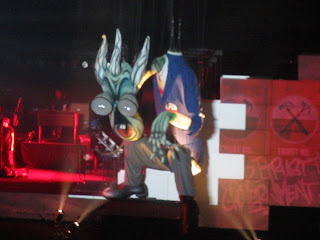 We were seated pretty far up and a bit to the right, but for something like this it’s actually better to get a more bird’s eye view. We’re not really there to see the musicians so much as the production and there’s a lot going on at times.

(My new camera held up pretty well too – we were allowed to take pictures as long as we didn’t use a flash, so I got the chance to check out the low-lighting settings. Not perfect, but certainly much better than my old one.) 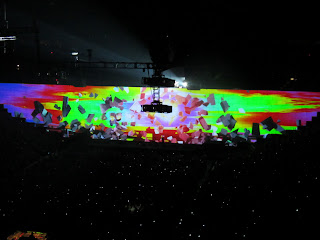 And I did end up with a hoodie. Mr myn wanted to get me a t-shirt, but most of the women-cut shirts didn’t do anything for me  – a yellow one with Vera and a red one with the raping flowers. The hammers freak me out, but I decided that was the one I wanted anyway – so now I have a black hoodie with the hammers that says “Trust Us”.

Which I wore to work.

I feel so high school. 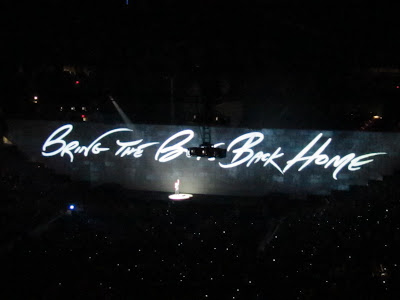 This entry was posted in concert, roger waters, the wall. Bookmark the permalink.