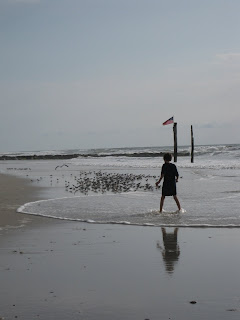 This past weekend was long and very lacking in sleep.

Not for any one particular reason – just lots to do, I guess. School shopping for the kids (and really, why the hell does my son need to bring in 12 gluesticks? Along with every other student? Are they making meth with this stuff?)

Work stuff, writing stuff. Web stuff. I actually made the decision to step down as webmaster for FF&P. I want to do it…but things have finally come to a head time-wise and I’ve got to cut some things. And it’s not fair to everyone to have a slack-ass for a webmaster. But something has to give, and unfortunately it’s the web stuff right now. Not that I’m going to just dump and run. I’m hoping someone will step up to the plate here soon that I can train. 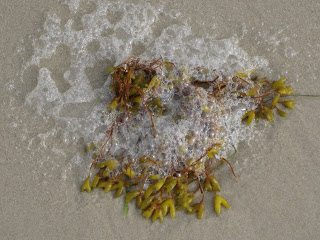 Anyway, we headed back up to LBI on Friday night. Sort of a bittersweet thing, really. Connor was getting ready to go off to camp (this week). First time away from us for that long and first time Lucy hasn’t had her big brother to hang around with. (She’s definitely not taking it all that well, so I’ve promised her a girly-girl night this week. We will go out and I will buy her a ton of nail polish or something.)

Saturday was brilliant – perfect beach weather. The ocean was actually pretty rough at times, but the beauty of it is that with the recent storms that have come through, it’s brought up a lot of the larger shells and a number of other things that aren’t always easily found – I found a number of my beloved moon-shells, some fully intact. (Most I’ve seen in *years*). And we also managed to snag some lovely green and brown sea-glass this time. (And there were baby angel-wings *everywhere*, digging into the sand.) 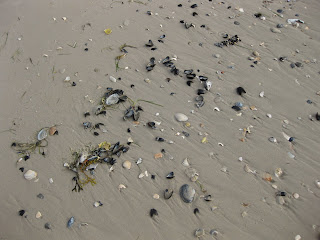 I told Connor we could do another early morning beach walk on Sunday. Which would have been fine except for the fact that  I came down with a killer migraine Saturday night. By the time I found the Excedrin it was past midnight, but I took it anyway. (I was pretty close to just barfing at that point.)

Of course, Excedrin has caffeine in it, sooooo..I laid awake until about 5:30 am. Sleep was also impeded due to the drunk asshats in the house behind us who sat and chatted loudly on their deck until about 4:30 in the morning. 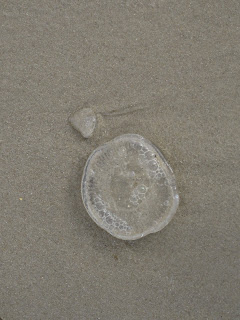 And then Connor came into my room at about 6:15. I convinced him to give me at least another hour. In fact, I wasn’t going to do it at all, but at about 7:15 I just got up and decided to do it anyway. Even as tired as I was, there is something so awesome about hitting the beach that early in the morning.

And Lucy was up by that point as well. I did offer to take her too, but she decided that coloring on the bed was a better use of her early morning time.

This is a jellyfish, btw (Aequorea in fact) –> If they’re clear, you can pick them up (and many of them glow in the dark if you catch them at night.). Don’t touch the ones that are purple or brown though! 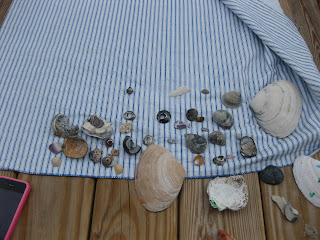 <– And here’s a bit of the haul from the first day. I was concentrating on smaller shells. I want to make some sort of micro-shell setup for my office.

Obviously the iphone there is NOT part of the scene.

At any rate, we came back and I spent the rest of the morning cross-stitching. (Which probably sounds boring, but I haven’t picked any or my projects up for over two years and I’ve had one I’ve been doing for Connor for a while now. If I don’t finish it soon, he will be too old.) 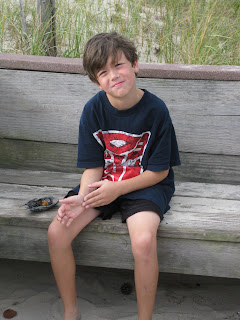 And then we went home. I attempted to get some writing done in the car, but the lack of sleep was rather telling. (Mostly in my ability to write a coherent sentence.) Traffic sucked too – over 6 hours to get back to Virginia. No idea what was going on with people. Maybe it was the rain.

But there it is. I’m still hoping to get back to the shore at least once more before the season ends. Maybe September or early October, but I guess I’ll have to see.

2 Responses to Beach-combing Part the Second