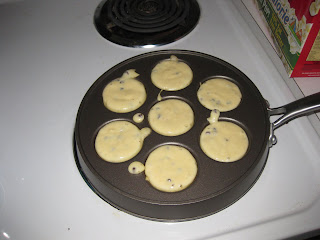 I tried my new Ebelskiver on Easter morning. I kept it fairly simple – just your basic chocolate chip pancake mix. Not that making full on chocolate ones stuffed with peanut butter wouldn’t haven’t been totally awesome, but I like to give things a trial run before I waste a lot of time prepping something that might just end up getting tossed out.

Anyway – first thing I learned? Don’t fill the little wells up all the way like I did in this picture. They cook too quickly on the bottom, but not enough on the sides/top to actually flip over with the skewers. By the time I could flip them, the bottoms were horribly burned. 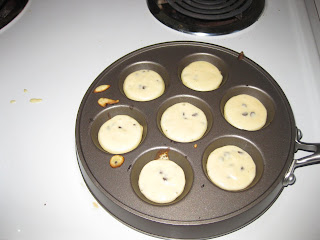 Next round I only filled them part way up and it was much better. According to the directions, I should have done that from the beginning, but where’s the fun in reading directions? Really?

Okay, sure, if I was hot-wiring a car or stripping a gun, maybe. But these are glorified pancakes.

Anyway – these came out much better. With a little more practice I’m sure I will become an expert. The thing is, I’m not sure if the payoff is worth the effort.

Regular pancakes are way simpler to make. These things are a bit of a pain to flip over and require a little more attention.(smaller size== faster cooking time). On the other hand, it produces “fun” food. 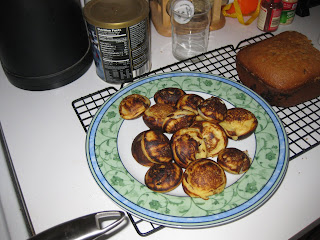 And okay, maybe they don’t look like much there, but the kids really liked them. Something about having little finger-sized breakfast foods maybe isn’t as intimidating as having to cut up an entire pancake?

And they *were* full of melted chocolate chips, so there’s not much to complain about there. At all.

Yes, that is a loaf of chocolate chip quick bread sitting next to the plate. Apparently this was my weekend for chocolate chips. Who knew?

So what’s my writing metaphor for today? I’m not sure I have one. Jeffe did post something the other day about quality vs quantity when it comes to writing. Like the whole NaNoWriMo idea of just getting words down, whatever they are. But how useful is it to stuff that manuscript full of stuff you’re just going to have to take out later, simply to meet a word count?

(See? Look! Ebelskiver and burned pancake metaphors. Don’t stuff your ebelskiver with too much batter! Awesomesauce.)

In either case, it sort of applies to me right now with the edits. I’m chucking out whole chapters and rewriting others completely, and as a result  I’m not moving as fast as I might in draft mode. Not because I don’t want to get it done, but because my time is at such a premium, it makes more sense to me to fine tune my craft as I go.

This entry was posted in editing, metaphoric crap that is supposed to mean something deep but probably doesn't. Bookmark the permalink.

5 Responses to Effort vs. Payoff