New Digs. AKA – Welcome to the Hellmouth. 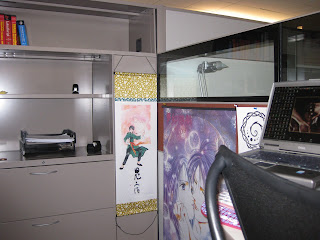 When I first started at my latest job, I had a real office. With a door. No windows at all, but that was ok. I could close the door and work in the dark and be just happy with that. (I dislike most office lighting systems – I tend to get major headaches from them.) People used to call it the bat cave.

Then we changed buildings and I was put into a cube. Not a particularly nice one, but the walls were pretty high, and I ended up getting a table so I could face forwards. I’m not very fond of having my back to the opening of a cube. Not because I give a crap if people see what I’m doing, but just because it makes me feel terribly exposed. 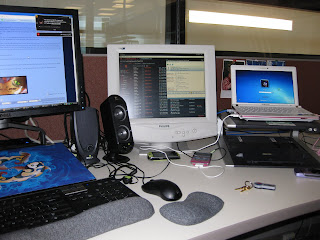 So now we’ve just changed buildings again and I have a new cube. It’s smaller – but much better laid out. Things are more efficiently appointed and I have no problem with that. (Although I have no room to hang my Jack Sparrow poster. Wah)

Yes, I have three computers and two monitors. I am a busy, busy bee. 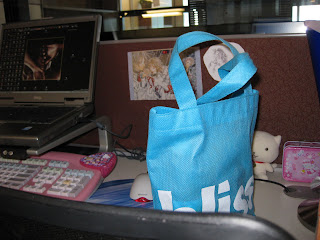 However. The new building is labeled as being “green”. This means that a certain amount of natural light has to be present in all the cubes – which means that they have very low walls, and the highest foot of those walls is glass. Which means there’s pretty much NO privacy of any kind. And it’s loud. You can hear phone conversations fifteen cubes away. I’m getting my own version of passive aggressive revenge by actually playing real music via my speakers. (And I have a subwoofer here – it thrums through the floor quite nicely).

Just wish the walls were a hair taller – I’m right on a hallway and people just walk by and look down at me. It’s kind of freaky. Which I suppose doesn’t mean anything other than the fact that I’m trapped in place by the corporate beast with no way out. 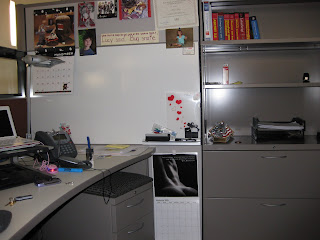 The astute observer will notice that I have put a certain naughty calendar in my cube. Hopefully low enough that it will not become offensive.

Though really, what could *possibly* be offensive about a man’s ass? It’s in black and white, anyway. That means it’s art.

This entry was posted in work. Bookmark the permalink.

4 Responses to New Digs. AKA – Welcome to the Hellmouth.