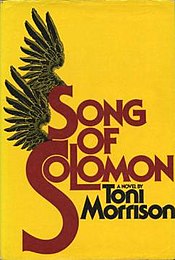 Not that I’m the first one to talk about it.

ALA Banned Book Week
The above link actually has the list of the top 100 frequently challenged or banned books. Looking through them, I saw the usual suspects – Song of Solomon, A Separate Peace, Rabbit Run, Slaughterhouse Five, and well, a host of others. I’ve never understood the practice of banning or protesting books – all it does is fire up the imagination of the kids who aren’t allowed to read them. Better, perhaps, to sit in a classroom and dissect just what *might* make a work offensive – but even so, some of the reasons given for being offensive seem downright laughable, these days.
“Foul language.”
“Sexual explicitness.”
“Vulgarity.”
Racism of one sort or another – whether degrading to blacks or considered “anti-white”. (WTF??)
Some of these reasons I suppose could be explained by the year of banning, but even the more recent ones are ridiculous, considering the average student sees more sexual content in a Burger King food commercial or their cell phones or on their iPods, than in Song of Solomon.
Hell, I’ve read most of the books on that banned list and while I’m sure some people might find them “titillating,” I seem to remember Catcher in the Rye as one of the most boring things on the face of the planet.
An example of why Catch-22 was banned:

By that logic, you might as well ban the bible too, right? I mean – it talks about whores. And sodomy. And keeping slaves. Having multiple wives. Comparing men’s penises to that of a donkey.
Yes. You read that right:
Wow. The guys were hung like donkeys and ejaculated like horses. Not sure I even want to go there. (Or hell, maybe I do?)
See the utter hypocrisy here?
But seriously, Winnie-the-Pooh? Charlotte’s Web? What in the world could be offensive about Wilbur or a stuffed bear? Unless we’re heading into the realms of the mega-religious – the ones that don’t approve of talking animals, that is. (You know, because that might mean they’re worth respecting – as opposed to something to be made into a baseball glove. The whole ‘dominion over the earth’ thing.) In which case, there’s not much to be done at all.
But anyway – read a banned book this week. And dream of well-hung men and their spunked out wangs.
This entry was posted in banned books. Bookmark the permalink.