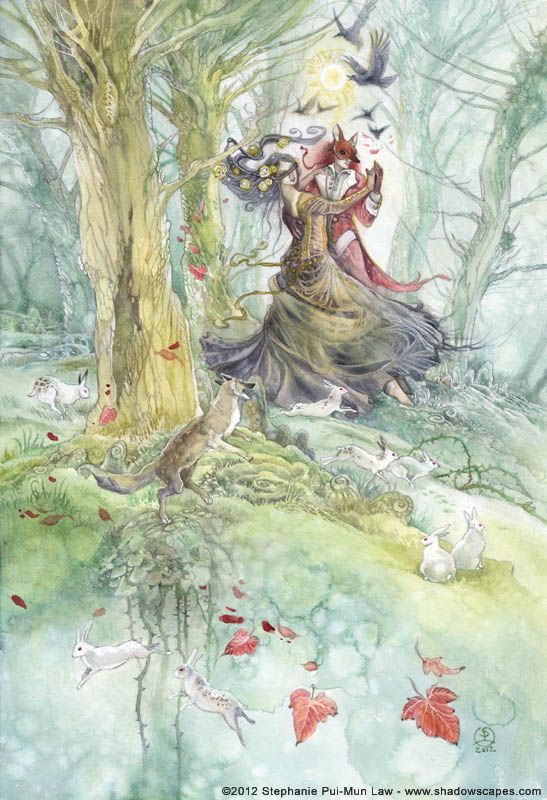 I decided to indulge a little bit for my birthday this week and bought a print of Stephanie Law’s The Trickster card from her forthcoming DreamDance Oracle deck. (The deck won’t be available for a while as it isn’t finished, but the cards that are currently there are all very lovely.)

And yes, this was a splurge. The only thing I actually asked for on Monday was a McDonald’s milkshake – I haven’t had one in years, and after a week in the hospital and all that jazz, I just wanted something simple, so happy birthday to me.

This card hits a number of buttons for me – foxes, rabbits, coyote, magpies, (all tricksters in various stories,) plus the romanticism of the dancing, masked pair – which does have a bit of a Labyrinth/David Bowie/Goblin King vibe to it, and that doesn’t hurt in the slightest.

I’ve always had a thing for Tricksters, but it’s always been in a “This is probably going to end badly” way. But I sorta see the woman up there in the same boat. I mean, she’s depending on the Trickster to lead her through the thorns – she’s dancing barefoot, after all. And chances are, he’ll probably leave her stuck in a grove full of them at some point because that’s who he is…but if you take a close look at her face, she’s got a blindfold on and yet, that one eye is just a bit uncovered. (Might be hard to see here, but in the print, you can see it.)  So I get the feeling she knows what she’s getting into and she’s not *quite* as blindly trusting as she seems.

What does that mean? I have no idea, but it spoke to me, so I bought the print. Probably one of those things I’ll need to really think on for a while.

It’s been a messy couple of weeks. The surgery was as much of a success as it could be. The hospital was a bit of a cluster – the AC wasn’t working right, so some nights I was just soaked in sweat, I ended up with a low grade fever, a pulse I couldn’t get under 110 for days…it was really rather frustrating, especially given that I felt fantastic the day or two post op. But the longer they kept me there, the worse I got. Nausea, headaches, actually hallucinating shit walking up the walls at one point…(And you know, most of the nurses were lovely – even in the middle of the night, they would gently come in and ask if they could take my vitals, or turn on the light, but there’s always that ONE asshole who would come in at 3 AM, flip the lights on full blast and jab a needle into my arm to take some blood and it’s like, really? Maybe just a little knock next time, yeah?)

By the end they kept me 3 extra days and I was begging them to let me go home and actually EAT something that wasn’t jello.  (“Please, the reason I’m dry heaving is because I’ve been on a clear liquid diet for 5 days. Stop shoving anti-nausea meds up my ass and get me a box of Cheerios, I beg you.”)

Which they did, and magically stuff got better. Until I started PT and apparently set off a piriformis muscle into spasm, which freaked out my sciatic nerve – which has left me bedridden for days – but it’s getting better now, I’m on prednisone for that, which I sorta hate because I become a raging insomniac, but it is what it is and I’d like to freaking walk again.

Saw the surgeon this week and the staples are out, X-Ray of my back looks good and the pain I had pre-op is gone. In fact, I took no painkillers at all after my 3rd day in the hospital, which seems to have freaked the surgeon and the nurses out, but I think that sort of thing is really telling from a chronic pain issue. Once the source of that is gone, regular pain is pretty much…nothing. It feels GOOD because it goes away, and there is something very healing about that.

In the meantime, I’ve come to the realization that I’m never going to sell this series of books I’ve been working on for the last few years. My rejections on this last go round were rather heartbreaking – I had a number of editors who loved it, but what it comes down to is marketing. Like nearly everything else I write, my stuff just doesn’t always fit in neat little genre boxes. One editor in particular lamented giving it up, but she knew her sales/marketing people wouldn’t get it and that would be worse than not taking it at all.

I guess. So I’ll be self pubbing those because honestly I really love the story – of the three books, one is written and ready for editing, one is 80% done, one still needs to be written – but I’ve started lining up my ducks for that as far as getting cover artists and editors in place and we’ll see what happens with that.

I’ll be doing the same with Fox & Willow – though that may go a bit slower since a number of the pages need to be rescanned and whatnot and unfortunately those are all halfway around the world and I cannot help Aimo with that part. We’ve debated Kickstarting it, but I’m not sure I’ve got the energy for that right now. Who knows. Any time art is involved there are a lot more steps, especially for print.

Otherwise, I’ve got two more books in the works – I’ll be working with my agent on them as we decide which one to tackle first. One is definitely more of a straight fantasy (yay, genre)…and the other which I adore, is probably going to be another one that doesn’t fit anywhere. (And incidentally, there is a Trickster figure in it, so maybe that’s just the way it goes.)

But in the meantime I’ll be sitting and healing, and one of these days maybe I’ll even dance again. 😉

This entry was posted in blog and tagged back stuff, book stuff, self-pubbing, tricksters, writing stuff. Bookmark the permalink.

4 Responses to Dancing With Tricksters

Leave a Reply to Kathleen B Cancel reply