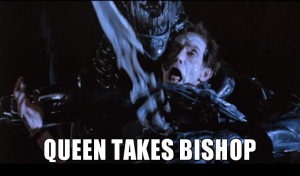 Yes, it’s an Aliens reference – but it’s been that sort of week. (And I watched it again the other night – it’s one of those comfort movies for me, for some odd reason.)

At any rate, radio silence being what it is, I’ve just been completely slammed – the volume of paperwork required for the kids’ summer camps is somewhat baffling, not to mention the crazy amounts of running about, and a fair number of contractors stopping by. (Mostly for estimates, but everyone’s trying to sell something. And really, why is it that nearly every contractor badmouths all the others? “Oh, you should have called me for X. You paid too much for Y.”  No offense, but making the homeowner feel like an ass isn’t the way to get their business. Just saying.)

And the dog. The dog. Little miss Maggie, who has been to the vet twice now for UTIs and a staph infection and deworming and all that fun puppy stuff that I really hope she outgrows soon. We’re taking her to the shore next week, so hopefully she manages the car ride okay and enjoys the sand. Hopefully.

But the main thing over the last few weeks is that I’m finally out on submission with a new book. I’m not going to go into any major detail about the book itself, except it is NOT an Abby book. (I am hoping to write a few more of those at some point, but not at this time.)

Going out on submission is a bit nerve-wracking for a number of reasons – it’s basically sending out query letters all over again, except my agent is the one that does it. (And you can read more about how that works from my agent’s perspective on her blog.)

So it’s a lot of hurry up and wait – and busying myself in something else. The submission process can take months – editors are busy with their own clients and books as well. And it’s tempting to sit here and check my email every five minutes, but that’s not really practical, so it’s back to working on something new.

And hopefully in a few weeks or months, I’ll have some good news to share. 🙂

One Response to In the Pipe…