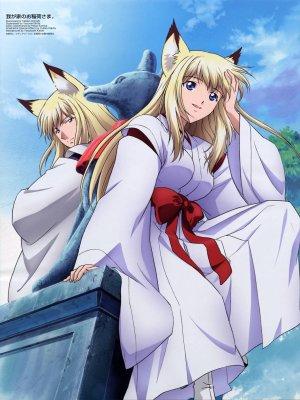 It’s been a rough couple of weeks over at the Pang house. Between snow days and sick kids, the daily schedule has been upset a little more than I’d like it to be. And then tack on last week, which was nearly a complete waste as I succumbed to a bout of the flu/strep/anemia thing as well that hit me a lot harder than I anticipated. I can write/work through a cold, but you know it’s bad when I don’t want to eat/play video games/read/do anything other than lie there and oh god, someone come put me out of my misery now.

(I did, however, stumble upon an anime on Crunchyroll entitled “Our Home’s Fox Deity” – if you thought that sounded like something up my alley, you’d be entirely correct. It’s a bit silly in places and there’s some typical fanservice, but I enjoy realizing that fox spirits are essentially assholes no matter what their form, so Gideon is right on track.)

The good news is the second bout of antibiotics seem to have kicked in and I’m on the downhill slope of that and back to normal, whatever that is.  Working on revisions, as per usual – which in this case involves shredding some of the middle bits of this new story. Moving things up, pulling the curtain back from my characters lives, fixing some rogue world-building threads that either aren’t making sense or maybe shouldn’t be there at all. (Sometimes I come across a sentence or two and realize I must have had a reason for it at one point, but it takes things down a tangent that dead-ends later on. Most of those I delete – if they weren’t important enough to follow before, they probably aren’t any different now.)

I have a tendency to hold things a little too close to my vest and I think that might be somewhat detrimental to this story. I’m not entirely sure why I write this way, though I suspect it’s got more to do with ME and a rather severe issue with introversion. I have a hard time letting some of those emotions through, sometimes – but that can lead to trouble later on, particularly if there’s a relationship involved.  In my own head, everything’s fine, but if I don’t allow things to show on the page in a more natural progression, it will look like a potential romance is suddenly shotgunned in at the end. (And at the moment, I’m debating if that is one of those threads that’s gonna get snipped. I’m all for romances, but this is feeling like a second book sort of thing and I don’t want to force it.)

Ah, well. Here’s hoping the next few weeks are healthy so I can get back to my normal routine.

One Response to Routine