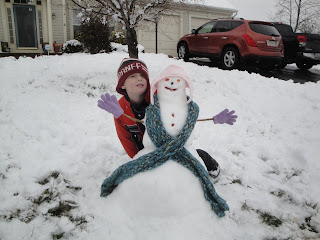 However – the picture there on the left was from Wednesday. We got maybe 5 inches of snow on top of what was left from the last snowfall. So, just enough to make things fun as you can see by the happy little snowman there. (Fruitsnacks for eyes and mouth, whee.)  I’m only posting it for perspective, you understand.

After the weather people got everyone all riled up on Thursday about the snow coming, almost all the schools in the area closed preemptively, before anything even started falling out of the sky. But that’s the DC area for you. It’s like people forget what snow looks like from year to year. There’s always all these stupid news reports on “How to Keep Warm” and “Where to Buy a Snow Shovel”. And there’s always a run on shovels too. Like what the hell do people do with the old ones? Chuck them in the trash after each winter? “Oh, it’s Spring! Guess I don’t need *this* anymore!”

Also? Guess what? You aren’t going to starve to death because you don’t have 3 loaves of bread the moment the snow starts falling, though based on the lines going around the block at the local Giant, clearly people aren’t getting that message. I always use these times as a “clean out my pantry” moment, aka “let’s eat all the crap we bought but never got around to using”.

On the other hand, DC is a pretty big melting pot – because of all the embassies, we do get people here that really haven’t ever seen snow before, but still. It’s frozen water, not a zombie attack. 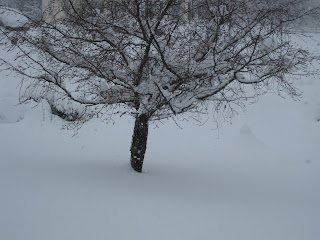 Anyway back to perspective – think we’ve got about 26 inches right now and it’s not supposed to stop until 10 PM tonight. Here’s Connor’s snowman–> (it’s that little triangular shaped thing beneath the tree…) 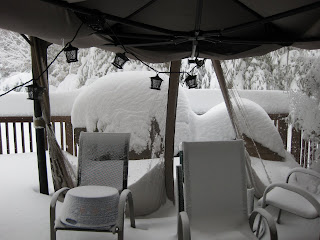 And this is still the tattered remains of my gazebo from December. Yeah, I’ll be chucking it. I did attempt to go out there last night with a shovel to knock some of the snow off it, but it was pretty much just a frozen mass. That little triangular mound on the right there is an insulated cathouse that my cats use sometimes when they are outdoors – turns out there was a stray of some sort in there when I went tromping around and it took off. 🙁

I don’t know if it came back but I hope it found shelter somewhere. I went back out there this morning and the doorway to the cathouse was completely covered up with snow. I dug it out just in case, but I didn’t poke too deep inside.

Otherwise, I’m just hanging out and coding, writing, reading and cleaning. Mr myn was kept overnight and will probably be kept again tonight, so I doubt I’ll see him until tomorrow night at the latest. Sounds like a an awesome excuse to make some chocolate peanut butter bread and pull out the DDR mat. 🙂