Termites and Winged Ants and Gazebos, Oh My

I called an exterminator yesterday.  Tuesday actually, but they came yesterday and did their thing.  I had originally called because we were getting ants.  Little ants falling out of the windowsills in the kitchen and big ass winged carpenter ants coming through the front.  Lucky me, Connor was quite willing to capture many of them in his bug zoo and bring them up to my bed at 6 am the other day.  (For fun later we put a grasshopper in there…it ate the ants.  Yay!)

So, not liking where this was going, I decided pest people were in order.  I called Home Paramount and they stopped by.  Of course, neglecting the fact that I left work early to try to get home in time for the 2 hour window, sat in bumper to bumper traffic (early, ha!), picked up the kids (because you know, if I had just shown up, these guys wouldn’t have come until closer to 7 and that would have been too late to get the kids) and went home.  Ah. And Fios was there.  Or Verizon.  We haven’t gotten it yet, but we probably will.  Our neighbors, however, were getting it installed.  Issue?  The box was on the other side of our yard, so there were about 5 Fios trucks parked out front and guys digging through my (NEW) grass, jackhammering, running line.  Good times.  And the bug guys were already there. So I had my two cranky kids to whisk inside, jackhammering men traipsing all over my lawn and bug men trying to sell me on ways to kill the insects that have determined to make themselves comfy in my home. And a massive thundercloud looming above us.
Bug man 1 went and sprayed poison crap all around my house.  No fire ants.  Lots of places regular ants were walking right into my house.  Probably living in the walls. Unemployed college cousin is coming on Sunday to cut back our “landscaping”.  (I’m lazy, he needs money – it works out well).
Bug man 2 found termites – some in the front garden under a rock and some under our deck. Apparently the fucktard who built the deck (AKA previous owner) decided to dump all the extra lumber under there.  Commence the termite buffet. They are not actually in the house yet, but surely that will come eventually. Bug man 2 wants $1100 to treat.  Seems a bit high, but it’s done by linear footage. House is 4000 sq feet including basement, so there we go.
We are researching other options and will see if we can get some other estimates.  In the meantime, I’m going to look at it as a chance to fix up the deck.  It needs power washing, re-staining and re-sealing.  Badly.  Unemployed college cousin doesn’t seem to want to do this part, so I’ll probably find a local handyman. 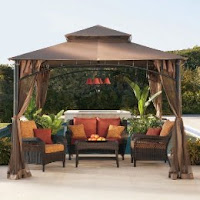 And I also bought a gazebo yesterday to go on said deck so now I really need to get it fixed up. It’s from Target.  Hopefully it won’t suck too badly to get it put together, but I have my doubts.  Looks like the picture, sans nice furniture.  We only have some really ghetto green plastic tables right now.  Maybe the winged pig will live inside.
This entry was posted in blog. Bookmark the permalink.

4 Responses to Termites and Winged Ants and Gazebos, Oh My